Everything Started with Pipes

Chutaro Yokoo made the most of his expertise in metal pipe processing as well as his own ideas to invent and develop many different products. This section focuses on the Spring Bar and the Rod Antenna, as they stand out among other inventions. (Registered as utility models)

Until the early Showa period, watch bands were sewn onto watch bodies. This method was cumbersome and made replacement of the bands difficult. Chutaro worked to develop components for easily attaching and detaching watch bands and consequently invented the Spring Bar.

The Spring Bar has a spring inside the metal pipe to enable the metal bars at both ends to extend and retract. This mechanism allows watch bands to be easily replaced.

It is used today in most wristwatches produced around the world. This suggests that it was an iconic invention that can be boasted about globally.

The Rod Antenna is a telescopic antenna made of the metal pipes often found on radios, televisions and other devices. However, the Rod Antennas that came with transistor radios at the time of their release were so poor in quality that they could not smoothly extend or retract.

Capitalizing on his knowledge of pipe drawing technologies, he came up with the idea of putting a flat spring made of phosphor bronze inside the pipe.

The antenna commercialized with this idea extended and retracted smoothly and was confirmed to have a high level of sensitivity. It thus won the world's largest market share at that time of more than 70%.

Until around 1955, the yarn-making industry had been a major industry that supported Tomioka City, but it had begun to struggle amid big changes in the industrial structure.
Chutaro Yokoo contributed to the development of Tomioka City and local jobs through the business expansion of Yokowo Mfg. Co., Ltd., predecessor of Yokowo Co., Ltd. 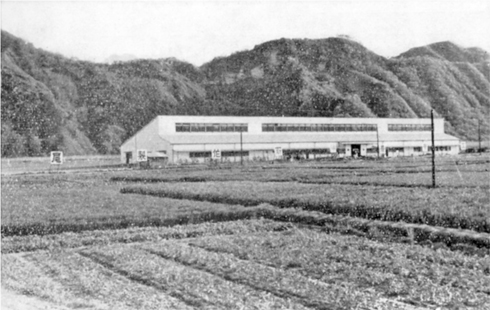 Around 1960, the demand for Rod Antennas grew sharply following the spread of transistor radios. In 1961, Yokowo Mfg. Co., Ltd. erected the Kanohara Plant to expand production facilities following the Nakamachi Plant and the Nanokaichi Plant.

At that time, the industry in Tomioka was at a significant turning point. The city had prospered with the yarn-making industry since the opening of the Tomioka Silk Mill in 1872.

However, Japan entered the period of rapid economic growth in 1955 and the Tomioka City Government took a positive action of inviting businesses to secure jobs for its residents, achieve income growth and establish its municipal financial foundations, aiming to change the industrial structure for the better. In 1962, it developed Tobu Industrial Park and succeeded in attracting two companies related to electric equipment.

Meanwhile, Yokowo Mfg. Co., Ltd. brought its Kanohara Plant into operation in 1962, before the attraction of the two companies. Chutaro's decision as an entrepreneur that deeply loved his hometown was behind the swift erection of the Kanohara Plant in the Tobu Industrial Park, in accordance with the municipal policy of changing the industrial composition.

That year, the city's electric equipment industry took over the leading position in product shipments from its yarn industry (Source: Industrial Journal Editing Committee (ed.) (2001): The Tomioka Industrial Journal/archives: The History of Industry and its Future, Tomioka City Government; see Figure (1)). On the other hand, Yokowo Mfg. Co., Ltd. increased its net sales four fold, from nearly 1 billion yen for fiscal 1960 (from January 1960 to December 1960) to around 4 billion yen for fiscal 1966 (from April 1966 to March 1967). It is thought to be part of the factor of the early reversal in the position of the two industries.

Yokowo Mfg. Co., Ltd. made a significant contribution to local job creation as well. Amid the rapid growth in shipments of electrical equipment products from Tomioka City, the staff members at its three plants, namely the Nakamachi Plant, the Nanokaichi Plant and the Kanohara Plant, had always accounted for about 40% of all workers engaged in the manufacturing of electric equipment since 1961. Therefore, Yokowo Mfg. Co., Ltd. supplied a large number of job opportunities to the city (See Figure (2)).
With Chutaro's distinguished talent in business management, Yokowo Mfg. Co., Ltd. achieved its own massive growth and contributed to the development of Tomioka City.

(Product shipments from Tomioka by business type and the number of workers are based on Industrial Statistical Surveys by the Statistics Division of Gunma Prefectural Government.)

As politician and businessman

Chutaro Yokoo long contributed to the development of his hometown, namely Tomioka City, through his service in municipal politics and industrial circles.

Meanwhile, in the municipal merger of 1954, he dedicated himself to the progress of the merger and made great contributions as chair of the merger promotion committee and as a member of the new city construction council.

In 1958, he was unanimously nominated to chair the assembly. He worked diligently in every aspect, including the establishment of the city's financial standing and the progress of public works.
In 1965, he was elected mayor. He fully displayed his knack of business in local politics to make significant contributions to the development of the city. His achievements include the construction of the joint school lunch cooking center for elementary and junior high schools. He completed his term of office, making such significant contributions to the city. 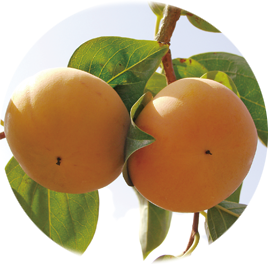 Chutaro continued to annually offer 5,000 saplings of Fuyu-gaki persimmon to farmers, named Chutaro-gaki after him, for more than 10 years in hopes that they would be planted in the former mulberry fields that have become idle, trying to make the persimmon a local specialty of Tomioka.

In recognition of his achievements as a businessman and contributions to the politics and economy of Tomioka City, which were made with groundbreaking inventions and devices, Chutaro was awarded the Order of the Rising Sun, Gold Rays with Rosette, Fourth Class in November 1966 and became Shogoi (Senior Fifth Rank) and received the Order of the Sacred Treasure, Gold Rays with Neck Ribbon in June 1977.
In March 2012, he was made an honorary citizen by Tomioka City.