Financial Announcements for the Current Term 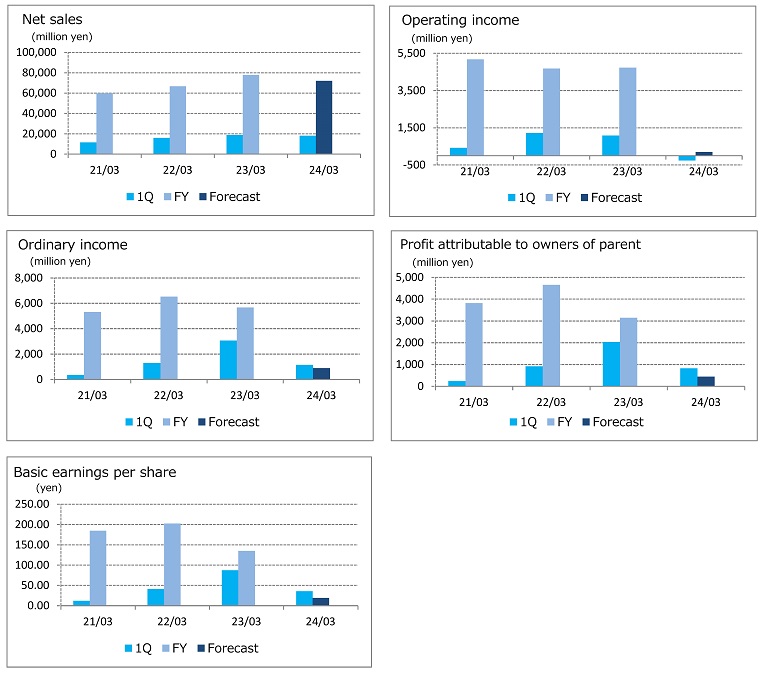 Overview of Consolidated Financial Results for the First Quarter of the Fiscal Year Ending March 31, 2022

Overview of Financial Results for Each Segments

In the automobile market, the main market for this segment, automobile manufacturers experienced stagnant production and inventory shortages mainly due to the global shortage of semiconductors. However, the shortages were modest compared to the year-ago period when they were substantially hit by the impact of the spread of the COVID-19. By region, the U.S. market saw an increase in sales volume in reaction to the production cutbacks in the year-ago period, and demand remained firm in China, the ASEAN countries, and Japan. As a result, sales volume increased year on year.
In this environment, mainstay products for car manufactures that are sold in Japan and overseas, such as shark fin antennas and GPS antennas, and ETC antennas and other products mainly marketed in Japan achieved net sales substantially exceeding the levels in the first quarter of the previous fiscal year by the reaction to the production cutbacks.
As a result, sales for this segment increased year on year, to ¥10,184 million (up 89.7 % year on year). The segment posted profit of ¥1million (a loss of ¥942 million in the previous fiscal year), due to a surge in ocean freights and an increase in physical distribution cost attributable to the increased use of air shipments that resulted from parts procurement difficulties and production delays.

The semiconductor testing market, which is the main market for this segment, performed well, mainly reflecting increased demand for personal computers and servers due to the expansion of telework and a surge in Internet use during restrictions on outings and self-restraint, and an increase in global smartphone shipments associated with the adaptation of 5G.
In these circumstances, sales of jigs for semiconductor back-end testing, the main product of the Group, were lower year on year, mainly reflecting the fact that orders for logic semiconductor testing sockets and sockets for high-frequency testing remained strong. Meanwhile, there was a reactionary decline from the increase in orders year on year and some production delays due to restrictions on the operation of the Malaysian plant caused by a lockdown. Sales of jigs for semiconductor front-end testing declined year on year, as orders received in advance in the year-ago period have normalized, despite a steady expansion in the turnkey business that offers one-stop solutions services including peripheral devices.
As a result, sales for this segment decreased year on year, to ¥3,400 million (down 16.0 % year on year). The segment posted a profit of ¥771 million (down 11.0 % year on year), due to lower sales and rising prices of raw materials, despite an increase in profit margins by raising the in-house production ratio.

In the market for mobile communication terminals, a key market for this segment, sales for wearable terminals are expected to grow due to their increasing diversification and sophistication, while sales of smartphones are on increasing. The POS terminal market has been growing steadily in a wide range of industries, including those engaging in logistics and manufacturing, with a view toward improvements in operational efficiency through information management. In addition, other markets, including the market for industrial equipment, are also expected to grow.
In this environment, the fine connector business, for which fine spring connectors act as core products, posted a year-on-year net sales increase, supported by factors, including a growth in orders for products for wearable devices, such as wireless earbuds and the strong sales of products for POS terminals.
In the medical device business, which is included in this segment, net sales decreased year on year, mainly reflecting a decrease in sales of parts due to the tight situation on the medical front lines, although sales of unit products remained steady.
As a result, sales for this segment increased year on year, to ¥2,437 million (up 13.2% year on year). The segment posted a profit of ¥447 million (down 11.1% year on year), mainly reflecting a decline in the weighting of relatively high-margin products in the fine connector business and a decrease in profit resulting from lower sales in the medical device business.